It has been a week of Wows. Last Friday I went to see Fiona Apple at The Greek and she was fantastic. I’ve been a fan of her music for years, but this is the first time I got to see her live, and she did not disappoint. Her recorded music has some ridiculously high vocals, which I didn’t think she’d be able to recreate in concert, but she hit all the notes with soul-baring ease. Extraordinary Machine is one of my favorite albums of all time, and her new material is extraordinarily awesome. The girl needs to eat though. She is so skinny that we wanted to throw sandwiches at her between songs.

Last Saturday we celebrated my friend Spencer’s birthday at the house, then walked to the Hollywood Forever cemetery for a movie. They were screening True Romance, in honor of director Tony Scott who passed away a couple weeks before. His wife spoke and said it was one of his favorite movies. Patricia Arquette, one of the stars of the film, also spoke through tears and said that Scott had given her her first big break in the business. I had never seen True Romance and loved it. The screenplay is by Quentin Tarantino, so it should have been no surprise. They passed out buttons with a small line illustration of Tony Scott, which helped to include all of us in his Cinespia memorial. It was a bloody fun, and lovely, night.

Last Sunday we brought Albert’s Aunt Sherry and Uncle Jerry to see Iris at the Dolby Theater. This is the third Cirque du Soleil show I’ve seen, and they are all so damn good. Iris has a new score by Danny Elfman, one of my favorite composers, which is performed gloriously live. The show is all movie-themed, and it is so smart and beautiful that it needs to be seen. I don’t tend to talk during shows, but I found myself audibly gasping ‘wow’ during many of the numbers. Where do they find these people?

Friday morning I decided to hike in Runyon Canyon to see if I could get a look at the space shuttle as it circled over Los Angeles. Clearly, nobody works regular 9 to 5 jobs in this town, because every peak of every mountain was covered in people looking up at the sky. Endeavor did a huge loop around the canyon, showing off for everyone at Griffith Observatory, Universal Studio, and the Hollywood sign. It was pretty incredible to see the space shuttle taking it’s last flight. It was even more incredible seeing a jumbo jet carrying another giant plane on it’s back. Wow! 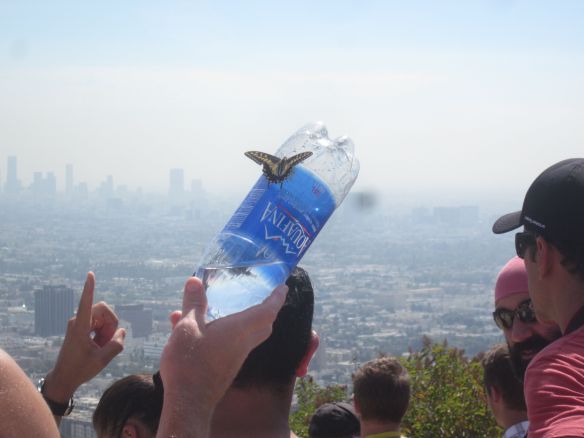 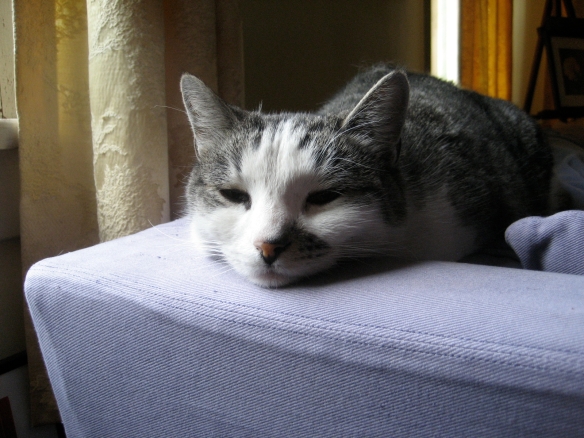 Rufus didn’t make it, and I’m incredibly sad. I’m not going to write about the experience because I don’t want to remember it. When I write things down, they tend to stick in my brain longer—they sear in. I want this to drift away. He was my first kitten and I immediately fell in love with him. I will tell you that we rescued Rufus six years ago and he was always sort of sickly. He had a chest rattle, an irregular heartbeat. We joked that he would die early of consumption, but he actually died early of cancer.

He was our backyard cat and I looked for him every day in one of his napping spots. I found him and held him in my arms, cradled him like a baby, which we both loved. When I didn’t take the time to look for him, he would always find me and stand by my legs until I picked him up. That’s really all we want—knowing that someone or something needs us, loves us, or just wants to be with us. I keep looking for him in the yard, like a crazy person. I miss my Rufus. That’s all I’m going to say, because I don’t want you catching my sadness. Please hug your pet, or your kids, or a friend for me.

Ever since Labor Day minor bad things have been happening, which I will now briefly share with you. I normally leave negative things out of my blog, but they’re not happening to you, so maybe that will make your life seem better. It’s the same reason people watch reality tv—at least they’re not a Honey Boo Boo Child.

It started when Albert’s hotmail account, which he has had since the beginning of the Internet age, went bust. His email address, which is linked to absolutely every other cyber account of his, froze. Like dominoes, this also took out his iphone. So, we spent the entire holiday weekend either in front of a computer or at the apple store, trying to fix all of his broken electronics.

Then our cat Rufus broke. Rufus has always been supermodel skinny compared to fatty Ratty, but he took a turn toward anorexia. He was literally vomiting and losing hair, so I spent the next week at the vet or trying to get food in him. We think he has a bacterial infection in his stomach, and he’s now on liquid antibiotics and pills for his liver, but we’re not sure if he’s going to make it. What’s weird is that he has turned into an entirely different cat. He was always more outside and now stays in. Rufus also would only eat dry Science Diet and wanted nothing to do with people food, even tuna. Now, he won’t touch dry food, and apparently likes Trader Joe’s smoked lunchmeat turkey. I did not think I would be so upset about a sick cat but I am.

Then I broke. I have been sick with a cold all week, and am just well enough to type to you today. See, now don’t you feel better!

I have still been going out and doing a few things to tell you about though. We walked to the DOMA theater company’s camp production of Xanadu on Friday night. The material for the musical is pretty funny, costumes were nice, and the lead girl was great, but I have to tell you to skip this one. The lead guy was painfully bad and for some reason decided to play the part as Keanu Reeves, and sing it out of tune. Most of the supporting players weren’t much better, but it was opening night, so maybe they’ll all get better. I will give a shout-out to chorus who were desperately trying to make it all work.

Saturday we went to our friend Gabi’s for a fun pool party. Someone in Gabi’s family who lives down in San Diego tried to play matchmaker for him, so Gabi invited some guys to the party that he didn’t know who were visiting LA. The guys had just come from some beauty convention, and immediately upon arrival tried to sell us products. They actually laid pamphlets out on the drink tables and passed around ‘before and after’ books. Do you know how NOT to make a good first impression with a bunch of gay guys and their girlfriends—tell them they need beauty products. They literally asked each and every one of us into the bathroom to apply potions to our face. Oh my god, who does that?

Sunday we went to the Hollywood Bowl for Passion Pit and Hot Chip. We picnicked before the concert and I baked ‘Hot Chips,’ which were spicy chocolate chip cookies and quite delicious.

Speaking of food, I have sandwiches to tell you about that you must try. We went with our friend Justin to Baco Mercat downtown at Main and Fourth and tried their bacos, which are sort of like gourmet tacos but on bread. All of the bacos were delicious and the few tapas sides we tried were fantastic—get the warm tarragon potato salad.

We also tried the new Laurel Hardware for lunch. I used to live on Laurel Ave in West Hollywood at that was my local hardware store. Now, it’s a very hip, upscale restaurant, but the original sign still hangs outside. The fried chicken sandwich and the grilled cheese with tomato soup dipping sauce were both worth the trip.

Finally, I went with my friend William to The Oinkster in Eagle Rock. The place has been featured on Diners, Drive-Ins, and Dives and is considered ‘slow fast food.’ Almost everything is made in-house, including the ketchups and mustards, and it is delicious. It is the best pastrami I have ever had in my entire life and I can’t stop thinking about it. This means that I must be feeling better, and it’s time for lunch.