Instead, I’m fighting a losing battle against what goes into my mouth versus how often I want to go to the gym. I just read that it is proven that people who watch cooking-shows are fatter than those who don’t. Um, I have The Food Network on all the time, so even when I’m not focused on it, I’m sure I’m subliminally gaining weight. Just typing the word food made me hungry, so I don’t have a chance.

Speaking of food, there was another lost dog in Bronson Canyon with an unfortunate name. Do not name your dog Hambone and expect it not to be eaten by something. Looking at his picture on his “Have you seen Hambone?” sign, he was adorable and appetizer size, so watch out, dinner-sized pets! Also I just read that “bone broth” is a new trendy food in Los Angeles. Do people not know that is just stock, and really only the beginning of a recipe? Puhlease.

So much music has happened since last we chatted. First, I saw Carrie: The Musical at the La Mirada Theater, which was very fun and surprisingly good. The telekinetic bloodfest has been turned into a rock musical about bullying. They’re testing it as a site-interactive show, and in this production we were actually seated on the stage set up like a high school gymnasium, and they also had people seated on bleachers, which were moved like sets. The cast performed everywhere around the room, and both the cast and the props flew dramatically through the air and overhead, which was very cool. Emily Lopez beautifully and nakedly (literally) played Carrie White. Her mother was hauntingly portrayed by the always terrific Misty Cotton. Yes, that is her real name and she can sang.

We also went to the first weekend of Coachella with our friends Steve and Corey. It was perfect weather and the Goldenvoice people know how to throw a great party in the desert. The art, the lights, the food, and of course the music, were all top notch. My standouts included Alabama Shakes, Kaskade, and Fitz and the Tantrums. This years star sightings were Clint Eastwood, Katy Perry (gorgeous), Eddie Cibrian (gorgeous), Shaun White, Tony Goldwyn from Scandal, and Kaitlin Doubleday from Empire who looks like a young Kelly Ripa. 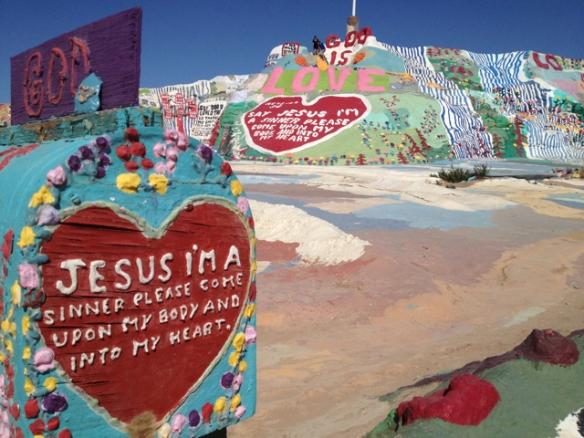 We also took a side trip to the Salton Sea, which is a large beautiful mistake of a lake. It is a huge salty lake created by an accident, fed by runoff, and surrounded by destitution and methamphetamine. There’s also a giant art piece in the middle of nowhere called Salvation Mountain, which seemed to have been inspired by Jesus and Dr Seuss. Again, I’m guessing methamphetamine. It’s a colorful, whimsical, and inspirational mountain of love and insanity.

Last weekend the music continued as we were invited to a garden concert. Our talented friends Rayna and her husband Jason sang folk songs accompanied by beautiful guitar and banjo playing. Several of their friends sang and played under a tree twinkling with lights, and we drank wine by a crackling chiminea and soaked in the stars above. Summer in SoCal has begun. 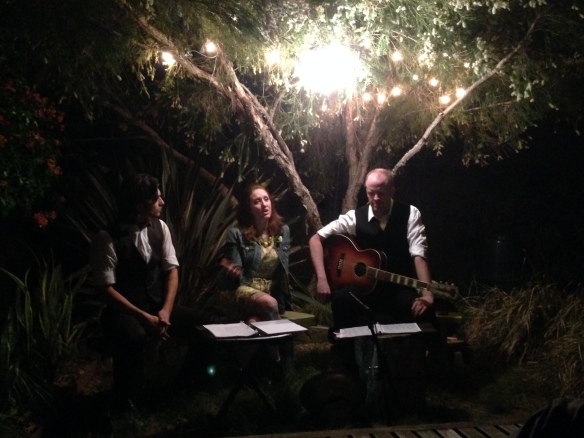 I have been a fan since the beginning of your career, since The Virgin Tour, but this is the first time I am writing to you. You haven’t needed my help until now. As a gay man in his mid-forties, there are only a couple things bigger in entertainment than the Madonna brand you have created—Barbra Streisand and the Broadway stage. This week you pooped on one of those things, and thankfully Babs was not your toilet, or I really would fear for you. The Streisand is very powerful.

This open letter was initially intended as a defense for you. I was at Coachella. I saw you kiss Drake, and saw the repercussions — the blatant ageism streaming out of the media. I didn’t like it one bit. Your act hasn’t changed, and you are still an amazing performer doing fantastic work. You are still a vibrant sexual being, and if the kids don’t like it, then F them. In fact, you have done just that to many young men, and I say keep up the good work. Older male stars have been paired up with young ingénues for years, and nobody seems to care, but there is a double standard for women. That is just not fair.

Then, this week you attended a performance of the musical Hamilton on Broadway and texted during the entire performance. Oh, hell no. Like I said, there are things bigger than you, and the Broadway stage is one of them. Regular people have to pay a lot of hard earned money to attend shows, and nobody gets the right to ruin their experiences. I would think a performer of your stature would respect any person on any stage, and I am very disappointed in you.

You call yourself an artist. An artist holds a mirror up for society to see their reflection and learn something or be moved. You are too busy looking in the black mirror at yourself. That is called an egomaniac. Please note that I’m taking the time to write, because I believe there is still hope for you. Kanye is not getting a letter.

First, you need to publicly apologize to Lin-Manuel Miranda, the cast and crew of Hamilton, and everyone in attendance. This will be difficult for you, because you think an apology shows weakness and have learned long ago to not apologize for your art. You never should apologize for your art, but you need to apologize for your bad behavior. You are not some Midwest tourist who never attends theater and doesn’t know better. You are an internationally traveled adult. Also, to be clear, do not post pictures of Margret Thatcher, give explanations and excuses, or deny that you did it. Social media is a two way street and we saw you. America loves a mea culpa, and Broadway deserves an apology.

Next, you need to put down the phone. You actually have people that can hold that for you, or, you know, get a purse. If you watch and listen to the people around you, you will be a better human, and thusly a better artist. I know you’ll do the right thing, so don’t disappoint me. We’re ready to forgive you and move on to dancing. Thank you for the music, and you’re welcome for the advice.